A Patent and Milestone: Why MBI’s AFEX Biomass Pretreatment is of Global Importance

Posted on September 25, 2015 by Melanie Kauffman 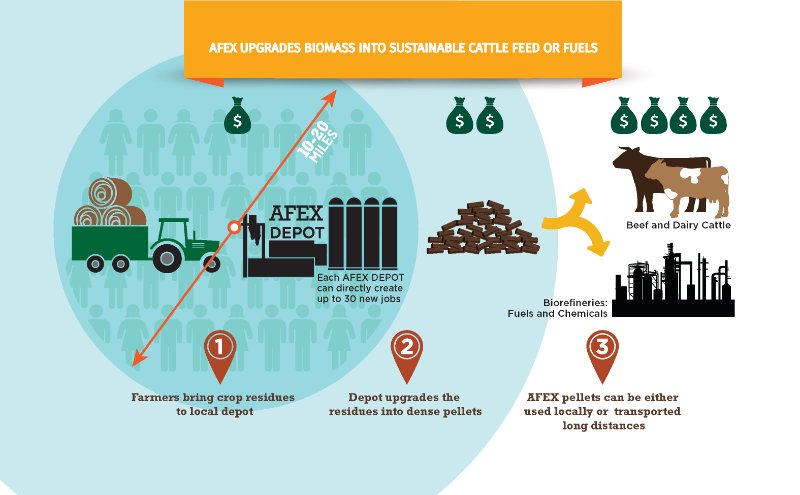 “To accomplish great things, we must not only act, but also dream; not only plan, but also believe.”

I am excited. I’m excited about MBI’s recent patent and milestone.

More importantly, I’m excited because as a society, science continues to unlock previous secrets and is consistently creating more opportunities to improve the world around us. Both modern medicine and agriculture have come a long way in the past 100 years, with breakthroughs such as antibiotics, and the Green Revolution, to name a few.

I am also excited (and fortunate) to be part of an organization, MBI, that through collaboration, has developed a game-changing technology of global importance called AFEX.

But before I explain why AFEX is both a game-changer and of global importance, let’s talk about the recent patent and milestone.

The USPTO recently issued a patent (patent no. 9,102,964) to MBI for AFEX technology. This patent is important  as it expands the development and commercialization of the AFEX technology. The AFEX team recently reached a production milestone of 500 batches–approximately 15 tons–of AFEX-treated biomass in our Lansing, Michigan pilot reactor, demonstrating the robustness of the process.

The pretreatment of crop resides, such as corn stover, is an enticing alternative to unlock useful sugars made unavailable by lignin. AFEX technology uses gaseous ammonia in a reactor to  unbind these sugars, while leaving the crop residue physically unchanged.  By utilizing the AFEX pretreatment process, the bio-availability of these sugars increases from approximately 20% to 75% plus–a dramatic upgrade of what was has previously been referred to as  essentially “crop waste.”

Michigan State University’s Professor Bruce Dale invented AFEX over 25 years ago utilizing a par reactor in a lab, so the technology itself is not new. A few years ago, Professor Dale and MSU partnered with MBI to derisk the technology and remove the barriers to commercialization. After a break-through with  how to scale the technology, MBI received a $4.3 million grant from the DOE to build the first pilot scale AFEX facility in our Lansing, Michigan facility.

In recent years, this promising technology has made great strides, but what is so different about AFEX compared to other pretreatment processes?

The AFEX technology is unique because one single pretreatment process provides flexibility for usage of the material in two very different applications–either turning crop residues into an alternate sugar source for biofuel/chemical production or surprisingly–as a cattle feed.

← History, Education, and the Chemistry of Beer
Working with Universities on Export-Controlled Technology →